A power supply unit, or PSU, was the first thing I started looking into after I bought my case. But I soon realised there is a vast range of power-supplying capabilities – with the most basic question “what wattage is it?” ranging from 300W to 1200W. That’s quite a difference.

So, ignoring other fancy PSU stuff, how do you figure out what wattage to get?

The answer: if you don’t know what other components you’re getting for your build yet, then you can’t really pick a PSU. Well, you could, but it might not provide enough power or it might provide too much power.

Not enough power is going to be more problematic. The worst case scenario is your computer won’t even boot up because the PSU is so under-powered. A more subtle scenario might be application or operating system crashes, but only under particular circumstances that push your PSU too far.

Too much power is less problematic. It will increase the cost of your initial build though, and could increase the cost of running it. Higher wattage PSUs are more expensive, thus increasing the cost of your build. Then depending on the rest of your build, you could end up running your PSU at a utilisation outside of its 80PLUS rating efficiency curve. That means it will be more expensive in the long run, as far as your electricity bill is concerned. Everything will run fine though, so you wouldn’t really notice.

You want the temperature of your porridge to be just right…

With all that in mind I started looking into other components.

It didn’t take long for more realisations to stack up. You can’t pick a motherboard without having an idea of what CPU you want… and you should consider your CPU spec when thinking about your GPU… and your CPU and motherboard combination might not allow your RAM to run at its highest speeds… and how much RAM do you really need anyway… and…

In short, it’s quite a juggling act to piece together a computer where all the components bring out the best in each other. No throttling and bottlenecks and the like.

Luckily, one of the first pages I found while looking into PSUs included a “Techquickie” video where someone called Linus was explaining the difference between single-rail and multi-rail PSUs. I figured I’d see if there were some other helpful videos like this that could teach me stuff… and so began my passive research rabbit hole…

Some time later, I started looking into PSUs again.

In the interim, I went from thinking I will build my computer piece-by-piece, to deciding I would be better off buying a bundle and accepting that I’ll do a little less computer building myself. As my other post mentions, that was largely due to the CPU I wanted to get and the whole GPU scarcity situation.

Now that I knew what the majority of my components were, I revisited my initial PSU research notes and dug into:

And of course a few more LTT videos along the way…

One of the most helpful things throughout that, was the Estimated Wattage on PCPartPicker’s System Builder. It seems to be able to provide an estimate for how many watts practically any component will need to draw from your PSU. I tried out various other calculators, but my decision was based off what PCPartPicker was telling me and a bit of what this ASUS calculator suggested too.

Ultimately I found my way to the Seasonic Focus PX 550W and decided to buy it. The combination of Seasonic’s reputation, the fact it was 80PLUS Platinum rated (unusual for the lower-end wattage) and the price of ~£100 all thoroughly impressed me.

After another night’s sleep I ordered it, and it arrived a couple of days later. There wasn’t much left to go now – soon it would be Build Day. 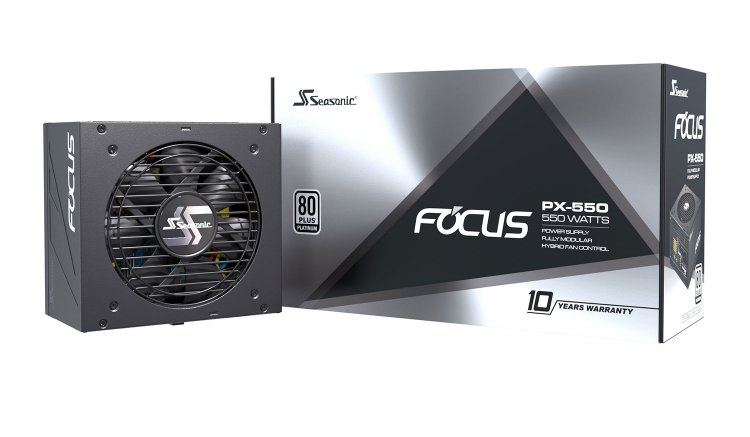